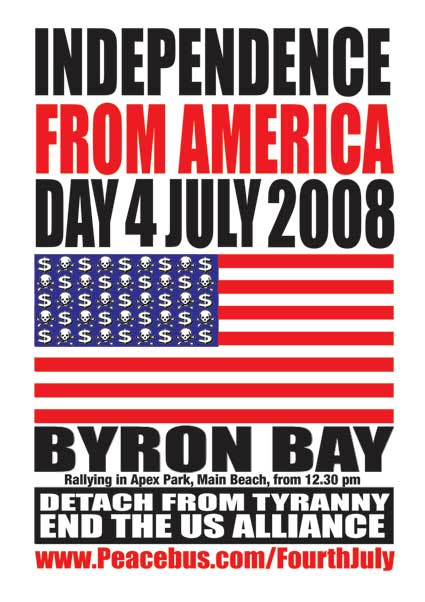 me time in the Byron Community and Cultural Centre, the parade coinciding with its lunch break.

Letter to the Editor of the Northern Star
17 June 2008

Will the real Bluey stand up?

The special affection she reports that Bluey holds for Nimbin is touching. It may also be a sign of a deafness because Nimbin is a place and a community at this time where Bluey and his policing are openly reviled.

To us doubters the profile reads like another piece of police media spin.

Presenting Bluey as a well meaning family man does not in anyway justify or ameliorate the damage done and the time and resources wasted by his Drug War obsessions and delusions about policing Nimbin.

Even the worst of the US trained captains of death squads and torture like to go home to a loving wife and kids and act as if they are ordinary blokes doing an ordinary job of work creating suffering for others.

Who is the real Bluey, what is he thinking and why does he need so many hats?

Maybe we will never know because Bluey is confused himself, an occupational hazard of undercover police where hidden identity, deceit and betrayal are core to professional practice.

But if our Police Commander is truly intent on making himself transparent and accountable, here are some questions.

In his long and illustrious career in covert operations did he ever receive any training in the US or by US trainers?

If so, what was it and how many of his NSW police colleagues have been like trained?

What has been his association, professional and otherwise, with Mark Standen, the former Assistant Director of the NSW Crimes Commission, now disgraced as a big time drug runner?

What were the collaborations? What were their fruit and how could he have been so deceived and/or deceiving?

But i would forgive it all if Bluey would get real about the failure of prohibition policies, the escalation of drug abuse that they have fostered and the endemic corruption our police services too.

Bluey, if you want respect in Nimbin, stop pretending that more police and more show policing will make any difference what so ever.

Stop the posturing, speak the truth and stand beside us in demanding law reform.

Let me close with some advice on style.

Akubra is US owned and the Texas Ranger look US derived. To the discerning eye, Bluey, an Akubra hat is as Oz and as sightly as a Ronald McDonald wig.

As part of the opening ceremony of The Dreaming, sponsors were thanked and the last on the list was the government of the USA. Though nothing untoward was said, a palpable sourness cut through the up mood of the crowd.

It was as if everyone there was in one mind thinking: "What is this costing us?"

The sponsorship itself was innocuous, support for a First Nation dance group, but that sour response was a sign to me of how deep and widespread the suspicion and contempt Australians now feel towards the US.

But when Rudd announced the withdrawal of Australian troops from Iraq, he made light of it, spinning "flawed intelligence" as the excuse for breaking with the Coalition of the Willing.

But no apology was offered for this either by the US Embassy or Rudd who had been so passionate in pushing this US intelligence on the ALP caucus at the time and fierce in his denial of the thousands of us who were on the streets protesting against what we plainly knew were lies.

To the contrary Rudd's Defence Minister Joel Fitzgibbon continues to call the deployment a success. Both Rudd and the neo con media pundits are at pains to assert the Iraq withdrawal in no way undermines the US alliance.

Rah! rah! and on we go with the US war on Afghanistan!

But at what the cost? $2.5 billion of Australian taxes was spent on the US war on Iraq.

And the fruit? A million or more Iraqi dead, the land devastated and poisoned with depleted uranium, the infra structure destroyed, oil resources hijacked and more people gunning for the US, and us by association, than ever before.

And apart from the dollars wasted, there have been other costs to Australian citizens.

The US War on Terror has brought upon us a wind back in civil liberties at home and at the same time we have been complicit and cooperative in human rights abuses abroad, to wit the abduction and torture which has been institutionalised in US jails such as Guantanamo Bay and Abu Ghraib.

And more pernicious still has been the neo con ideology foisted upon by the US Alliance, the ideology which has rationalised the privitisation of hard built public assets such as Telecom, demolished all regulation of big money, offered up our assets and resources for stripping in Free Trade Agreements and run down public services such health, transport and education.

That's what the Independence from America Day rally in Byron Bay on Friday 4 July is all about.

Assemble in Apex Park Main Beach from 12.30 pm for a parade through Byron. Be visible, be heard, bear a placard, wear a costume, beat a drum.

For peace. For justice. For the Earth!

Letter to the Editor of the Byron Echo
3 June 2008

Seems Assistant Director of the NSW Crime Commission, Mark Standen, gambled his career for high stakes, $120 million worth of chemicals for making ice.

The high stakes were ours too.

Standen's arrest makes vivid what is happening to policing in NSW.

When policing is all about appearances and playing for the cameras, the deceits of show policing become general practice, an institutional culture of lies and deceits.

The situation has been exacerbated by the Terror War militarisation of policing. Invested with extraordinary powers and new weapons, the Terror War is a war by the state against the people and it comes with all of wars attendant secrecy, covert operations, lies and disinformation.

The NSW Crime Commission has been shown to be an agency out of control. But just another in the long and sad story of prohibition induced corruption of enforcement agencies across Australia and the world.

This is why we protest.

The law is the crime. Prohibition policies are a gross corruption of the public good and they have their roots in laws and policing practices foisted on us by government agencies of the US.

Just like the War on Terror and our futile and vicious wars in Iraq and Afghanistan, the no win Drug War is the toxic fruit of the US alliance.

Grow up Australia! Wake up, Rudd!

End the Terror. End the US Alliance.

For those who like to make their dissent visible, Friday 4 July next will be celebrated as Independence from America Day with a rally and parade through the streets of Byron Bay.

The eighth annual, it will assemble in Apex Park, Main Beach from 12.30 pm.

Make a placard, wear a costume, carry a flag, beat a drum.

For peace. For justice. For the Earth!

Report and photos of Independence
from America Day 2007

Prepublicity for Independence
from America Day 2007

Report and photos of Independence
from America Day 2006

Photos of Independence
from America Day 2004

Photos of Independence
from America Day 2003

Photos of Independence
from America Day 2002

Other productions and campaigns of Peacebus.com