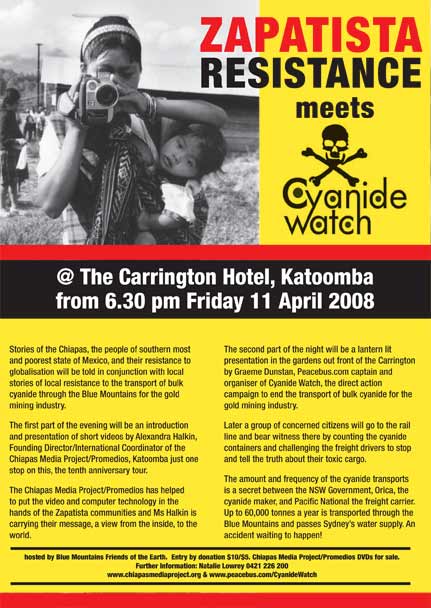 Pacific National, the freight corporation which carries bulk cyanide for the gold mining industry, has informed Blue Mountains police that there will be no cyanide on the rail when Cyanide Watch gathers to bear witness tomorrow evening.

Cyanide Watch organiser, Graeme Dunstan, said he was grateful for the decision.

"Every day without cyanide freights on the rail is a day closer to banning them forever," he said.

"Maybe this is a sign that Pacific National have a conscience about the deadly hazard they are creating for Blue Mountains residents, the World Heritage National Park and Sydney's water supply," said Mr Dunstan.

"Maybe Pacific National ought be nominated for a Good Corporate Citizen for a Night award," he said.

"But more likely it is that they are dirty boys doing dirty deeds and seeking to avoid the watchful eyes of concerned citizens."

Orica, the maker of the deadly cyanide, ships an estimated 60,000 tonnes year from its plant in Gladstone down the east coast, through Sydney and the Blue Mountains to supply the far flung gold mines in western NSW, SA, NT and WA.

But the exact tonnage and frequency of the freight trains is unknown.

The Hon. Lee Rhiannon MLC in a statement made yesterday reckons the NSW Minister for Climate Change, Environment and Water simply doesn't know.

Dunstan reckons the information is being kept secret for counter terrorism purposes and Orica and Pacific National are happy to keep their toxic trade hidden from public scrutiny and, in the name of public safety, create public hazard.

Cyanide Watch is a direct action campaign to bear witness to the cyanide crimes of the gold mining industry and, supported by Blue Mountains Friends of the Earth, it will be assembling tomorrow night, from 6.30 pm Friday 11 April @ The Carrington Hotel.

Greens MLC Lee Rhiannon is challenging the NSW Government to inform residents of the Blue Mountains about how much and how often cyanide is being transported by rail through their community for the purposes of gold mining in Western NSW.

Blue Mountains Friends of the Earth are hosting an information night on the use of cyanide in gold mining at the Carrington Hotel in Katoomba from 6.30pm this Friday 11 April 2008.

Cyanide is now being transported from Gladstone, where it is produced, to gold mines in Western NSW through the Blue Mountains.

"The Blue Mountains is the source of most of Sydney's water supply and a cyanide spill would have significant consequences," Ms Rhiannon said.

"In 2007 I asked the Minister for Climate Change, Environment and Water, about the amount of cyanide being transported by rail and the frequency of its transportation. The answer was, 'we don't know'.

"It seems either the NSW government doesn't know, or the information is part of a secret deal with Orica, the maker of cyanide, and Pacific National, its rail carrier.

"It's estimated that more than 60,000 tonnes of cyanide a year are freighted down the East Coast from Gladstone where Orica makes it, across Sydney and over the Blue Mountains to gold mines in Western NSW.

"The government is currently considering whether to grant approval to expand the controversial Lake Cowal gold mine.

"This will almost double the size of the pit and extend mine's life from 13 to 20 years.

"This means, for just this one mine alone, at least an additional 6,000 tonnes a year of cyanide will pass through the Blue Mountains for an extra seven years," Ms Rhiannon said.

Cyanide Watchers will be at the rail at Katoomba from 8.30 pm next Friday 11 April demanding the freight train drivers stop and come clean about the toxic cargo they are carrying through the Blue Mountains, a World Heritage Area and source of most of Sydney's water.

"As gold ore reserves run down, the gold miners are working lower and lower grade ores and using more and more cyanide," he said.

Cyanide is a deadly poison - just 1 gram is fatal dose for humans - which is used to leech gold from crushed ore.

Orica Australia Ltd makes the cyanide at their plant in Gladstone, Qld, and freight it by rail down the east coast to Sydney, then across Sydney by truck, then across the Blue Mountains by rail to the far flung gold mines in the west.

"The NSW government is being evasive about the total amount of cyanide and the frequency of the cyanide freights," said Mr Dunstan. "Seems this information is a secret deal between the Minister for Environment, Orica and the freight company, Pacific National."

But estimates are that the present figure is about 60,000 tonnes a year, which is about 1000 tonnes a week, and more and more each year," he said.

"Increasing cyanide meets the run down of maintenance on the privatised track, it's an accident waiting to happen," says Dunstan.

The Cyanide Watch action will assemble out front of The Carrington Hotel in association with a Friends of the Earth evening of DVDs from the Chiapas Media Project/Promedios about indigenous resistance in southern Mexico.

Stories of the Chiapas, the people of southern most and poorest state of Mexico, and their resistance to globalisation will be told in conjunction with stories of local resistance to the transport of bulk cyanide through the Blue Mountains for the gold mining industry

The first part of the evening will be an introduction and presentation of short videos by Alexandra Halkin, International Coordinator of the Chiapas Media Project/Promedios, Katoomba just one stop on this, the tenth anniversary tour.

The Zapatista autonomous communities are the most documented indigenous movement in the history of the world, with hundreds of videos, films, books and websites created by people looking in from the outside.

The Chiapas Media Project/Promedios has helped to put the video and computer technology in the hands of the Zapatista communities and Ms Halkin is carrying their message, a view from the inside, to the world.

Later a group of concerned citizens will go to the rail line and bear witness there by counting the cyanide containers and challenging the freight drivers to stop and tell the truth about their toxic cargo.

"The amount and frequency of the cyanide transports is a secret between the NSW Government, Orica, the cyanide maker, and Pacific National, the freight carrier," said Graeme Dunstan, Peacebus.com captain and organiser of Cyanide Watch.

"The cyanide freights supply most of the gold mines in the west, maybe 60,000 tonnes a year, and more and more each year, passing through the Blue Mountains, source of most of Sydney's water supply.

"Combined with the maintenance run down of the privatised track, a bulk cyanide spill is an accident waiting to happen." he said.

The evening will be hosted by Blue Mountains Friends of the Earth. $10 donation plus $5 student/pensioner. Chiapas Media Project/Promedios DVDs for sale. 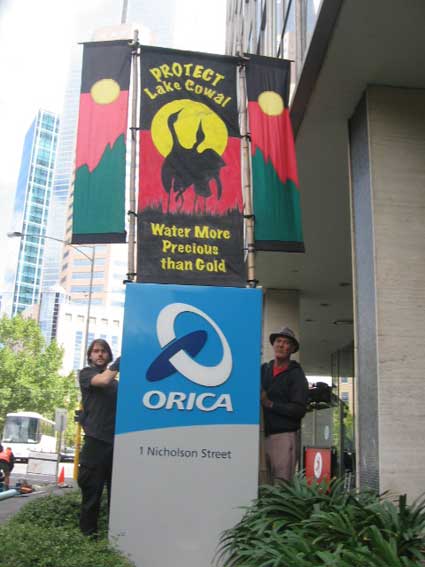 Nick and Steve hold a Lake Cowal banner at a Cyanide Watch action outside the corporate headquarters of Orica Australia Ltd, biggest maker of cyanide and ammonium nitrate in the land,
Melbourne, 29 February 2007.

An index of other Cyanide Watch actions past